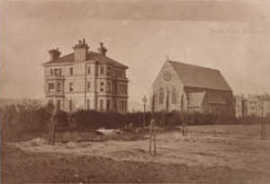 Holy Trinity Church and vicarage in 1878

Our house of prayer and worship is a striking Grade II* listed building dating from 1868.

According to the Church of England, it is designated as a Major Parish Church, being exceptionally significant with a ‘different scale of opportunities and challenges compared to the majority of the 12,267 listed Church of England buildings’. A Major Parish Church has all or some of the following characteristics: it is physically large (with a footprint of over 1,000m2); is grade I, II* or II listed; has significant heritage value; is open to visitors daily; and it makes a civic, cultural and economic contribution to the community. Holy Trinity Church has been identified as one of the 11 Major Parish Churches in Kent and is the only one in Folkestone to be given this designation.

The Church is built of brick with Kentish rag cornerstones, and has clerestory windows, which give the church a light feel. It has some exceptional stained-glass windows, including a series depicting the 12 'I am' sayings of Jesus and vivid new windows depicting the Creation which were installed in the south porch in 2014. The apse was restored for the Millennium.

In the 1860s the Earl of Radnor had elaborate plans for the development of the West End of Folkestone. As part of the planned expansion of the town the Earl's policy was to fund the building of a church every quarter of a mile, so that everyone could walk to church. Architect Ewan Christian drew up the plans and the first stage of the building was completed in 1868.  The Vicarage was built next door in 1870, and a tower and spire were added in 1888.

The congregation expanded under Canon F. C. Woodhouse, Vicar from 1885-1905, who with his second wife was a great benefactor of the Church. Fine furnishings were installed including the reredos (Clayton and Bell), the sanctuary ceiling painting and much of the stained glass. In the late Victorian and early Edwardian era, well-to-do visitors and residents flocked to the town. Holy Trinity seems to have been a popular Church. Indeed, shortage of space led to the addition of choir and clergy vestries in 1913

The First World War had a profound effect, with many of the congregation leaving the town and several of the larger houses being requisitioned for military purposes.Gradually the congregation returned after the War, but by then society had radically changed. 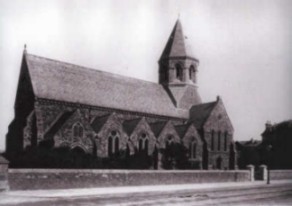 Nevertheless, under Canon W. H. Elliott (Vicar, 1918-1929), additions such as the ambone lectern, the alabaster pulpit in memory of those in the parish who had died in the 1914-18 War, and decoration of the All Saints Chapel were completed. Plans for building the south porch were also drawn up.

From the start, the Church had gained a reputation for its choir and high musical standards. This was further enhanced under Choirmaster W. C. Luttman in the 1920s. Moreover, Canon W. H. Elliott was a preacher of renown and services were broadcast regularly on radio, possibly one of the first churches from which services were broadcast. A literary and musical society, the Bouverie Society, was founded and flourished, the Church engaging lecturers and musicians including Sir Leonard Woolley, Forbes Robertson, Myra Hesse, Cortot and Schnabel. These lectures and concerts were held at the Grand Hotel, Leas Cliff Hall and Pleasure Gardens Theatre.

Church life was drastically affected by the outbreak of the Second World War as most of the population was compulsorily evacuated from the town. The Vicar's income, which was derived from pew rents, dropped dramatically and it was decided to close Holy Trinity Church. Canon Cook, the Vicar of Christ Church, a nearby Church, looked after the Holy Trinity Congregation who remained, becoming Priest in Charge of the parish in 1941. The destruction of Christ Church by an enemy air attack in 1942 resulted in the re-opening of Holy Trinity and subsequently the two parishes were merged. 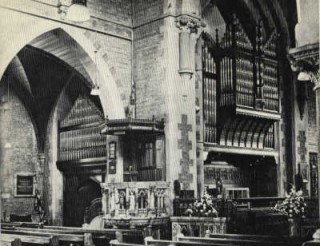 After the war, work gradually took place to repair damage to Holy Trinity Church - the result of high explosive bombs falling near the Church in 1940. By 1979, all the stained glass windows that had been destroyed in the sanctuary and north side of the Church had been replaced. The Church now boasts a collection of Victorian glass, a William Morris window, and fine examples of twentieth century glass from the studios of J. E. Nuttgens, A. K. Nicholson and Canterbury Cathedral Glassworks.

The original organ was replaced in 1888 by one built by Bishop and Son. It had several overhauls and was reconstructed in 1966 by J. W. Walker & Son.